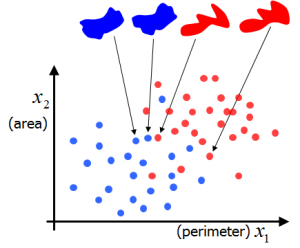 Example of a compact representation

The significance of a proper representation has been discussed here in several ways. The scene is now ready to make a significant step which is not often discussed in the pattern recognition literature. Let us first summarize the observations made so far.

Representation is the step in pattern recognition between real world objects or events and a space where objects can be related. A vector space is a good and popular example. Also models like strings and graphs can be used as long as it is possible to compute (dis)similarities between the representations of objects.

In a representation space densities and distances may be used for generalization. It makes it possible to relate new objects to the classes defined for a training set. 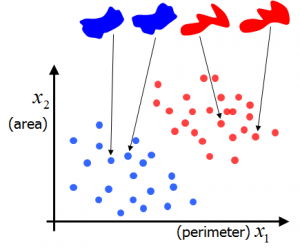 Example of a true representation

In case the real world objects are labeled unambiguously then objects assigned to different classes cannot be identical. They will be different. If a true representation could be found then also the representations of objects the belong to different classes will be different. Consequently such classes will not overlap. For the example this means that area and perimeter are the only relevant object properties. Objects for which these are the same should be identical.

Consequently, true representations are a way to construct separable classes.