How should I interpret the output of a classifier?

PRTools distinguishes two types of classifiers: density based and distance based. Some classifiers follow a slightly different concept but are squeezed into these two types.

Density based classifiers estimate for every class a probability density function

is the class and

the vector representing an object to be classified. Classification can be done by weighting the densities by the class priors

and selecting the class with the highest weighted density:

Sometimes we want to use posterior probabilities (numbers in the

] interval) instead of weighted densities (

). They just differ by normalization:

They result into the same class assignments

as the normalization factor

. Here is a PRTools example based on the classifier qdc which assumes normal densities. The routine classc takes care of normalization;

to the separation boundary (which are in the interval (

) by a sigmoid function to the interval (0,1). Distances are scaled before the sigmoid is taken by a maximum-likelihood approach: the likelihood over the training set used for the classifier is optimized. Classifier conditional posteriors are obtained for two classes

by using the optimized sigmoid and one minus this sigmoid.

See also our paper on this topic (Classifier conditional posterior probabilities, SSSPR 1998, 611-619). This approach is followed for all classifiers that optimize a separation boundary like fisherc, svc and loglc. Multi-class problems are solved in by a one-class-against-rest procedures (mclassc)  that results in a confidence for every class.

By applying the inverse sigmoid function invsigm posterior probabilities computed in the above way can be transformed backwardly into distances. It has to be realized, however, that these distance are not the Euclidean distances in the given vector space but that they are scaled in the above way. 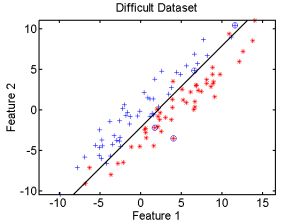 There are various other classifiers that do not fit naturally in the above scheme, e.g. as they compute distances to objects that cannot be negative. Here it is shortly indicated for some of them how they are squeezed in the above concept.