Everybody tries to understand his world. Some people, the scientists, try to do this in a systematic way. They report their findings in books, journals and at conferences. The starting student may think that there is a single way of doing this, of building knowledge and describing progress. He will be confused on what he hears and reads. He is right to be confused. There are many ways, indeed.

It will be very helpful to recognize the way a particular scientist thinks, although it may not always be the same. He may switch directions. Some serious scientists choose to be consistent. This has to be respected, because it is helpful for their audience. On the other hand, one should be flexible as a reader, as a participant of conferences, or in the daily discussions with colleagues, as otherwise interesting contributions may be missed.

In the Platonic way of thinking there is a basic idea about how things are. This is often an implicit and abstract notion that cannot be sharply defined. Reformulations of the starting point of view are permitted as all languages, including logic and mathematics have their limitations. Platonic thinkers need observations to phrase or rephrase their views. Some of them are able to explain any new fact in the light of their original theory: “tell me how it is and I will tell you why”.  Their world of ideas is rich, in the basis consistent, but they have difficulties to formulate them as such. Their deepest thinking seems to be from another world, at least not grown from the facts around us.

In an extreme form Platonic thinking may turn into fundamentalism. In milder forms it may refer to myths and legends or to common sense that lives in each of us. It is an interesting exercise to find out where in our own thinking basic ideas and beliefs pop up. The origin of a new hypothesis may be based on it. We may also recognize that we are slow in refuting our hypotheses. Some of them we really like and a single counter example might not be sufficient to reject them, in contrast to what Popper stated and in line with the observations of Kuhn on paradigm shifts.

We will not often meet an Platonic thinker in pattern recognition. It is too much of an engineering field and Plato is far away from real world systems that directly deal with the observable world. Pattern recognition studies learning from examples, while the Platonic thinker does not learn but he knows. At most he adapts the way he phrases his knowledge. So we may meet this direction of thinking in researchers who already have, e.g. by introspection,  a clear idea how learning works and then enter the research field. A Platonic colleague or the ability to transform ourselves in this way for some period is, however, certainly useful as we will occasionally have the need to renew our set of hypotheses. 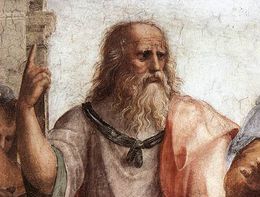 Some areas closely related to pattern recognition that are more mathematically oriented stay close to the fundamental concepts and ideas. For instance statistical learning theory sometimes heavily focuses on the derivation of bounds and convergence speed. Here one may observe the first struggle of formulating an idea into language (logic or mathematics). The proofs may be wrong, or the theorems not applicable. The concepts, however, the basis of the Platonic thinker, are neither right nor wrong. They just are.