We were invited to watch the search for eastern eggs at the preschool of our grandson Pim. He is about two-and-a-halve, does not speak so much, but is mainly an observer. Internally he might even be a philosopher, who knows?

We had to take the early train and rent some bicycles to arrive in time at the daycare center in a former monastery somewhere in a forest. Many parents and grandparents where there to attend the event, so the small group of children all between 2 and 3 years old, was almost lost in the crowd. After an opening ceremony with a song, a story and a puppet play they went outside to search the eggs. For most of them the concept of the event was unknown or lost in the past. 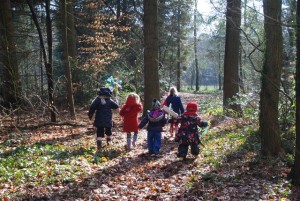 The small chocolate eggs were not hidden before but just thrown on the path, the grass and even the benches when children looked into another direction. Many eggs around us, but apparently the eyes of the children were not prepared for this. The adults saw eggs everywhere and soon found out that following the right teacher was the optimal strategy. Children however just stared and needed a lot of help to collect the eggs. I was not impressed about their pattern recognition abilities.

After closing we cycled with our daughter to her home for some coffee with cake. Pim, in a small children seat at her bicycle handle bar had made the trip for many months, but this was the first time that he was joined by his grandparents. He was hanging outside, looking backwards to observe his grandmother a few meters behind. She had fresh baked eastern cake, prepared the night before hanging in a shopping bag at her handle bar. ‘Grandma, grandma, come with us!’ he shouted. 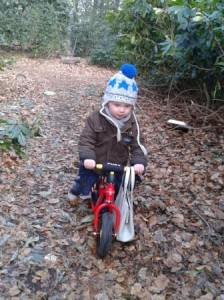 We had the coffee with the cake and went home. The next day we received a picture of Pim, cycling in the park. Just like grandma he wanted to have ‘a bag at his handle bar’. It was an entirely different bag, but for him it was perfect! Recognized as similar. I was shocked and now impressed by his pattern recognition abilities.

Children of Pim’s age know a few hundred words and within some years even a few thousand. Almost every word they know (except for the names) is connected to the concept of an object, an action or a quality and not to a single, particular item or event. The human pattern recognition system is able to handle thousands of complex classes. It is trained for many years and able to classify new observations within a second. We are used to it and do not think about it so much. Grandchildren make you realize how remarkable this ability is.