What is the difference between Artificial Intelligence (AI) and Pattern Recognition (PR)? Is one a subfield of the other or do they stand next to each other? Historically these two fields are strongly connected. Meetings in the 50’s and 60’s attracted researchers from both domains and for many the interest was so broad or not yet focused that they felt comfortable with either of the two descriptions.

The Western Joint Computer Conference in 1955 (WJCC55) contained a session on machine learning and some papers on pattern recognition. In 1956 in a workshop in Dartmouth the field of Artificial Intelligence was established. In the workshop it was aimed to study “the conjecture that every aspect of learning or any other feature of intelligence can in principle be so precisely described that a machine can be made to simulate it”. Moreover: “An attempt will be made to find how to make machines use language, form abstractions and concepts, solve kinds of problems now reserved for humans, and improve themselves”. See the Wikipedia articles on the history of AI and the Dartmouth Conferences. The problems related to the sensing and the representation of real world objects were not mentioned at all. 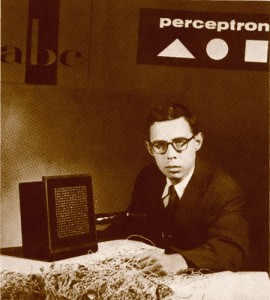 Most influential was the work of Frank Rosenblatt, the founding father of the artificial neural networks that he called perceptrons. It was able to recognize patterns of similarity between new data and data it has already seen. His book, Principles of Neurodynamics, Spartan, 1962, which described the mathematical foundation of training and recognition by perceptrons, was very inspiring for the AI/PR community. Seven years later, however, another book, Minsky and Papert, Perceptrons, MIT, 1969, revisited the same topic and analyzed the limitations of perceptrons, and, unintentionally, caused a heavy disappointment. The AI community focused much more on logic and reasoning and the research on perceptrons and neural networks was banned from the PR field for 20 years.

Separate journals were founded. In 1968, Pattern Recognition as the first one on PR and in 1970 the AI journal. However, one of the most significant journals for both domains is the IEEE Transactions on Pattern Analysis and Machine Intelligence, covering both approaches. The fact that this is an engineering journal makes it clear that for solving practical problems it is not an issue under which flag it is done, AI or PR. And still, the various journals and conferences in both domains cover numerous research reports that could have been easily presented in the other area.

Opposite directions of research

Is there no essential difference at all and have these two fields just been separated for insignificant personal or social reasons? It may definitely happen that in different communities the same topics are studied and that they only find out about each other after a long time, e.g. when some researchers move from one institute to another. This is certainly not the case here as the above historical facts show. The two areas of AI and PR where together for many years but at some moment the need for separate platforms was felt.

May be one is just a sub-area of the other. PR is often listed as a specialized field inside AI. For some researchers in PR, it feels the other way around. There is the general issue of how to imitate human intelligence on mechanical devices like computers. AI focuses on the reasoning part and PR deals with observations. At the end, both are needed when it comes to practical implementations and thereby in the engineering area they meet.

From a scientific point, however, the two fields follow a fundamentally different direction. Elsewhere the difference has been described between the Platonic and Aristotelian ways of dealing with knowledge. Plato starts with given concepts (ideas) and tries to apply them to specific real world observations. Aristotle starts with observations and aims to come to concepts that generalize them.

Given these two essentially different scientific approaches, we might map AI on the Platonic approach as it emphasizes primarily the modelling of human knowledge and reasoning. In a second step, it may adapt these models to observations. In this scheme, PR can be mapped on the Aristotelian approach as its goal is not directly to mimic knowledge and reasoning, but the handling of observations as they are given. In a second PR step the observations have to be generalized and to be integrated with available knowledge.

For both holds that their own first step is natural. This step is within its specific domain of expertise. But also for both holds that their second steps are difficult and can in fact only be made if some inspiration is gained from the other side. Adaptation of knowledge (AI) to real world observations may need some PR abilities. Generalization from observations (PR) may be supported by knowledge about concepts (models) to be supplied from the AI side. In conclusion, AI and PR might be defined as essentially different ways of studying the progress of knowledge by mechanical means, but these studies can only be fruitful in discussion with each others expertise. On both platforms the debate between Plato and Aristotle should be welcomed, but it should be kept in mind that their first principles are essentially different.