In science, new knowledge is phrased in terms of existing knowledge. The starting point of this process is set by generally accepted evident views, or observations and facts that cannot be explained further. These foundations, however, are not the same for all researchers. Different types of approaches may be distinguished originating from different starting positions. It is almost a type of taste from which perspective a particular researcher builds his research. As a consequence, different ‘schools’ may arise.

The point of view, however, determines what we see. In other words, by staying within a particular framework of thought we cannot achieve more than what is derived as a consequence of the corresponding assumptions and constraints. To create more complete and objective methods, we may try to integrate scientific results originating from different approaches into a single pattern recognition model. It is possible that confusion arises on how these results may be combined and where they essentially differ. But the combination of results of different approaches is  fruitful, not only for some applications, but in particular for the scientific understanding of the researcher as it broadens the horizon of allowable starting points.

This step towards a unified or integrated view is very important in science as only then a more complete understanding is gained or a whole theory is built.

Below we will describe four approaches to pattern recognition which arise from two different dichotomies of the starting points. Next, we will present some examples illustrating the difficulties of their possible interactions. This discussion summarizes a part of a paper on the science of pattern recognition [1]. 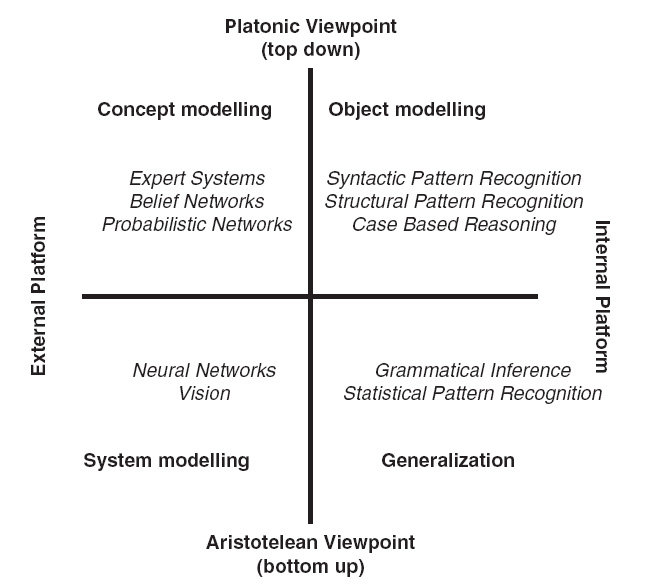 Two principally different approaches to almost any scientific field rely on the so-called Platonic and Aristotelian view points. In a first attempt they may be understood as top-down and bottom-up ways of building knowledge. They are also related to deductive (or holistic) and inductive (or reductionistic) principles.

The Platonic approach starts from generally accepted concepts and global ideas of the world. They constitute a coherent picture in which many details are undefined. The primary task of the Platonic researcher is to recognize in his observations the underlying concepts and ideas that are already accepted by him. Many theories of the creation of the universe or the world rely on this scenario. An example is the extinction of the mammoths. Theories do not result from a reasoning based on observations, but merely from a more or less convincing global theory (depending on the listener!) that seems to extrapolate far beyond the hard facts. For the Platonic researcher, however, it is not an extrapolation, but an adaptation of previous formulations of the theory to new facts. That is the way this approach works: existing ideas that have been used for a long time are gradually adapted to new incoming observations. The change does not rely on an essential paradigm shift in the concept, but on finding better, more appropriate relations with the observed world in definitions and explanations.

The observations are of primary interest in the Aristotelian approach. Scientific reasoning stays as close as possible to these. It is avoided to speculate on large, global theories that go beyond the facts. The observations are always the foundation on which the researcher builds his knowledge. Based on them, patterns and regularities are detected or discovered, which are used to formulate some tentative hypotheses. These are further explored in order to arrive at general conclusions or theories. As such, the theories are not global, nor do they constitute high level descriptions. A famous guideline here is the principle known as Occam’s razor. It urges one to avoid theories that are more complex than strictly needed for explaining the observations. Arguments may arise, e.g. because the definition of complexity depends on the mathematical formalism that is used.

The choice for a particular approach may be a matter of preference or determined by non-scientific grounds, such as upbringing. Nobody can judge what the basic truth is for somebody else. Against the Aristotelians may be held that they do not see the overall picture. The Platonic researchers, on the other hand, may be blamed for building castles in the air. Discussions
between followers of these two approaches can be painful as well as fruitful. If they don’t see that their ground truths are different their debates become pointless.  But if they do they may become inspired by each other’s views. One will then finally see the real world examples of his concepts, while the other may embrace a concept which he didn’t think of himself but that summarizes or constitutes an abstraction of his observations.

In the contemporary view science is ‘the observation, identification, description, experimental investigation, and theoretical explanation of phenomena’ [2] or ‘any system of knowledge that is concerned with the physical world and its phenomena and that entails unbiased observations and systematic experimentation’ [3]. So, the aspect of observation that leads to a possible formation of a concept or theory is significant. Consequently, the research topic of the field of pattern recognition, which aims at the generalization from observations for knowledge building, is indeed scientific. Science is in the end a brief explanation summarizing the observations achieved through abstraction and their generalization.

Such an explanation may primarily be observed by the researcher in his own thinking. We all carry the generalization ability inside us. Pattern recognition research can thereby be performed by introspection. What are our primary observations?  Do we see directly the entire object (‘I just see that it is an apple’), or do we first see its attributes (‘it is an apple because of its color and shape’).

We can also observe pattern recognition in action by observing other human beings (or animals) while they perform a pattern recognition task, e.g. when they recognize an apple. Now the researcher tries to find out by experiments and measurements how the subject decides for an apple on the basis of the stimuli presented to the senses. He thereby builds a model of the subject, from senses to decision making. It is an external approach.

Both these approaches result into a model. In the external approach, however, the senses will be included in the model. In the internal approach, this is either not possible or just very partially. We are usually not aware of what happens in our senses. Introspection thereby starts by what these senses offer to our thinking (and reasoning). As a consequence, models based on the internal approach have to be externally equipped with (artificial) senses, i.e. with sensors.

The above two dichotomies result in four approaches: